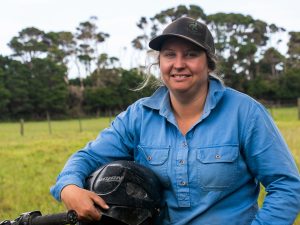 Meet Chloe Watson the farmer behind your purchase.

Passionate about adopting practices that will preserve the island and be in the best interest of the island and all of its inhabitants Chloe has adopted the practice of shelter belts and rotationally grazing.

Shelter belts are sectioned off parts of the paddock traditionally running along the fence lines that create shade for cattle and wildlife corridors for the native animals.

“For me, farming is about maintaining a tradition. I took over my grandfather’s property and I try to honour his memory while also making my own contribution.” Chloe Watson

“My goal is to provide high quality beef for consumers through running a fattener operation – shelter belts are fenced off, cattle graze on a rotational basis and we focus on buying better producing steers.” Chloe Watson