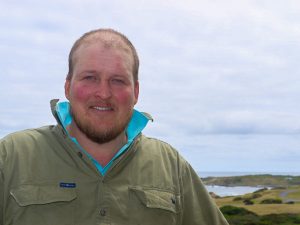 Meet Nathan Conley the farmer behind your purchase.

Located in central King Island, Nathan Conley is the sole operator and manager to a Angus and Poll Hereford property.

Conley has been involved with the Cradle Coast Authority, fencing off the Sea Elephant River. This initiative has increased biodiversity and animal habitats, reduces erosion and protects vulnerable plants and bird species.

”King Island is an integral part of our family heritage. Since soldier settlement after World War II, we’ve had five generations grow up here. The farming environment – with the temperate climate and consistent annual rainfall – is really outstanding.” Nathan Conley