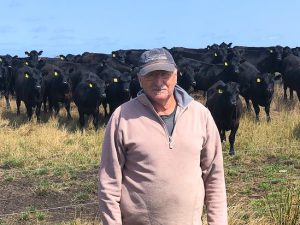 Meet Peter Watson the farmer behind your purchase.

Peter was born on King Island, as was his father and grandmother. He, his wife and his children all grew up here. The island is something Peter feels a very close connection to, the only place he has ever called home.

His family have lived on his farm for three generations and he hopes it will stay in his family forever. He walks around the farm reminiscing sometimes, remembering back to when he was 8 or 9 years old, and thinks it would be nice for his kids to have the same experience when they get older.

Peter believes that on King Island, community is very important. Generally, everyone pitches in to help if anyone is undergoing any hardship. It’s a safe place to raise kids and has perfect conditions for producing and fattening cattle – the place is clean and green all year round.

Peter really values his relationship with JBS. Getting their feedback helps him a lot when it comes to treating cattle. And Boyd Hoare, the JBS Livestock buyer on King Island, is always willing to lend a hand. He helps Peter load his cattle, and even drives a truck for him if needed. Peter appreciates the fact Boyd goes above and beyond what you would normally expect.

In 2018, Peter won an award as JBS Producer of the Year for the Southern Australia region. Peter puts it down to following the JBS Farm Assurance guidelines.

Peter ‘You’re trying to do a good job so why would you go outside of the JBS parameters and not do it properly. It’s much better if you’re doing it the JBS way –collaboration, sharing of knowledge, training and insights – it leads to getting you a better result.’ Peter Watson